Interview: In Conversation with Brian Carter, Bestselling Author and CEO of The Brian Carter Group 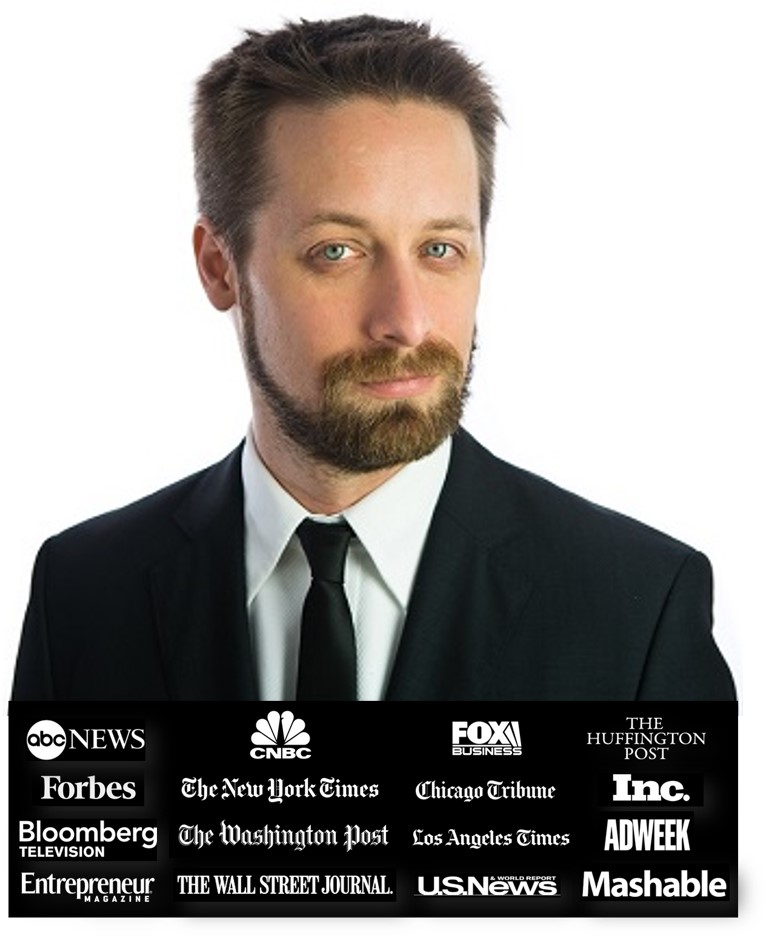 Brian Carter is a bestselling author, keynote speaker and a widely known and recognized Digital Marketing Consultant. He is the CEO of The Brian Carter Group, a boutique digital marketing agency.

Brian has authored four bestselling books so far, namely – The Like Economy, LinkedIn for Business, Facebook Marketing, and The Cowbell Principle. He has keynoted and developed marketing programs and strategies for hundreds of companies including top 50 companies in the fortune 500. Some of his esteemed clients include Microsoft, Salesforce, WHO and CiTRiX to name a few.

Brian has also been a contributor to top marketing blogs including Social Media Examiner, Mashable, Convince & Convert, AllFacebook and Convince and Convert.

In this interview, Brian talks about the future of Facebook, Google+, the changing social media landscape, Google and also about the possible challenges internet marketers may face in the future and lot more. We hope you enjoy reading it.

Kavin Paulson: Hi Brian, thank you so much for your time, we are honored to have you featured in The iMarketing Café. Can you tell us something that we do not know about you?

Brian Carter: I used to have a dog named Brad Pitt and I still have a cat named Larry Bird.

Kavin Paulson: Tell us more about The Brian Carter Group

Brian Carter: We focus on getting bottom-line business results for companies, preferably leads and sales, ideally at the best possible ROI, and usually in innovative ways. Ever since 1999, there’s always been a big opportunity in Internet marketing- something that could help a David beat a Goliath… an area of temporary opportunity. It’s when something new becomes powerful before everyone discovers it and it gets too competitive or stops working. I’ve been pursuing those opportunities and harnessing them for myself and other companies since 2004: AdWords, Twitter, Facebook Marketing, Facebook Ads, LinkedIn Groups, YouTube PreRoll, Squeeze Pages, Content Marketing, and so on.

KP: You started your career as an Accupunture Professor at Pacific College of Oriental Medicine and two years later you joined Adventure 16 as Ecommerce Manager. How did that transition happen? What was the reason behind making a career change?

BC: Really, I started life as a nerd. I had a Radio Shack computer at age 9 and a Mac at age 11. The acupuncture was a six year phase of self-discovery. During my Master’s degree training I ran a website about it, learned SEO through that and soon after I made $20,000+ a month a couple months in a row from AdSense and my own keyword analysis equations. During that time I realized that practicing alternative medicine wasn’t for me, and switch full-time to Internet Marketing.

KP: Researchers at Princeton University have predicted that Facebook will lose 80% of its peak user base by 2017. What’s your take on that? How do you think Facebook will change five years from now?

BC: That’s ridiculous. They based their theory on search demand, but one reason people might be searching for Facebook less is Facebook might already always be open in their browser. It might be their homepage. They might have learned how to type “facebook.com” into their browser. Facebook is the second most popular website, right behind Google. Facebook is the #1 smartphone app. People are using Facebook on their phone as an app more and more, which may require fewer Google searches for it. There are many possible explanations for a drop in Google searches for Facebook.

They also justified their prediction by comparing the lifespan of MySpace to Facebook… also ridiculous, because MySpace had a big competitor in 2011 when it ran into trouble. What competitor? Facebook, a social site that every age group liked better than MySpace. What competitor does Facebook have? Nothing that every age group likes better than Facebook. There is no social site that is as compelling or as sticky as Facebook. It’s not going anywhere. Yes, some younger people prefer a few other sites like Instagram and Snapchat, but if you want the answer to which site has the most young people on it, the answer is still Facebook.

We humans are very bad at predicting the future- Nate Silver, aside. Historically no one holds futurists accountable, so it’s a great gig. You can say whatever you want and get headlines for it. I prefer to do responsible things like help businesses get results with the things that work right now- like Facebook marketing. We get really affordable leads and sales with good ROI for companies of all kinds, both B2C and B2B with Facebook advertising.

Here’s another reason it doesn’t make sense Facebook would lose its user base: Facebook is to social what Google is to search, what Amazon is to online purchases… and websites tend to own 70-90% of the userbase in their area of utility. What platform could realistically unseat them? I don’t see anything on the horizon. It’s like Google- what are you going to do- copy Google or Facebook and ask everyone to switch? Why would they switch?

People used to ask, “What’s the next Google going to be?” They thought they were asking about the next search engine. The next Google was Facebook. Similarly, the next Facebook might not be a social media site.

KP: How do you think the newly emerging social apps will change the social media landscape in the future?

BC: Blab.IM is an exciting new app. Like Periscope and Meerkat it demonstrates that real-time video is becoming more and more important. This presents challenges for brands who aren’t agile and don’t have spokespeople, but is a big opportunity for small and medium sized brands. Still, most companies should use the biggest, most powerful and proven marketing platforms like Facebook, Google, Amazon, Kindle and eBay.

KP: Should marketers write off Google+? Do you think G+ will still be relevant to businesses in 2016?

BC: Google+ is not relevant now. Google has all but written it off themselves. It never proved itself to be integral. If you look at the most powerful social platforms to market or network on for the most businesses- assuming that yes there will be some exceptions- it’s Facebook, then Twitter and LinkedIn, then a very sharp drop off to Instagram and Pinterest. Most companies don’t have the time or money to get that far. If you prioritize well, G+ has never made a lot of sense, and there’s no indication that will change.

KP: What kind of challenges do you think the internet marketers will face in the future?

BC: I honestly think that overwhelm with too many options, with shiny objects, and with thinking about the future are problems- these distract businesses from doing better with the platforms and tools that are working right now. There is plenty of work to be done with Google, Facebook, Blogging, Video, and other content marketing creation and curation. Improve your tracking. Create content that improves your sales. Make sure you have tracking all the way from traffic source to CRM to sale.

KP: Where do you see Google five years from now?

BC: In the future. 🙂 My apologies for the smart aleck answer, but seriously, I am not a futurist, and I don’t like futurists. I think they’re irresponsible. I think you should focus on what works well now and make it work even better. The future will take care of itself. In the future, you will be working on the now, right? Or in five years will you be thinking about what’s going to be happening in ten years? At some point you’ll have to stop and actually get to work.

KP: Are you working on your next book? If yes, tell us a bit about it.

BC: I am working on several things- one is a book with Kathy Klotz-Guest about how to be more effective with storytelling in business. We’ve been interviewing a ton of smart folks about that as we work on the material ourselves. Those interviews are already coming out on video under the moniker StoryDNA.

KP: Where do you see yourself five years from now?

BC: Seriously? I don’t like to limit myself. I don’t believe in 5 or 10 year plans. You want to make God laugh? Tell him your plans. Everything I wanted in the past was not nearly as cool as my life is now. It’s better to work on interesting things, do good work, help people and see what happens. Life is an adventure. If you know what’s coming around the bend, it won’t take your breath away when you see it.

KP: How would you describe yourself in one word?

KP: If you could change one thing about yourself what would it be and why?

BC: It would be nice to be 6 feet tall. Sometimes because I do comedy, people tell me to grow up. I say- no, I think if God wanted me to be a grown up, he would have made me at least 5 foot 9.

KP: What are your future plans for The Brian Carter Group?

BC: To stay in the present.

KP: If you were not a marketer, what would you have been?

BC: A lead guitarist in a grunge band. I was close, but I had no drive beyond my creative drive back then- no business drive- and the internet didn’t exist. I would have loved to play with Chris Cornell.

KP: On a lighter note, what would you do if you woke up one morning and found that you had become Sundar Pichai? 😀

BC: I don’t know who or what that is, but it sounds painful 😉

KP: (laughs). Thank you so much Brian. It was great talking to you and all the very best for your future endeavors.

BC: Thanks! Sorry for being difficult about the futurist questions! 🙂

Interviewed by Kavin Paulson, editor of The iMarketing Café.

Interview: In Conversation with Ian Lurie, Founder of Portent, a Digital Marketing Agency

Interview with Grant Simmons, Director at The Search Agency

Interview: In Conversation with the Renowned SEO Expert Eric Enge